Since C was about 2 months old I’ve wanted to make a keepsake shadow box.  I wanted to put in it some of that stuff from the first few days that you want to remember, but just don’t know what to do with it.  So, for the past year I’ve had his keepsakes in a pile, literally a pile.  For the past 3 months I’ve had the shadowbox.  I finally made the shadowbox now that he is 14 months old!  It turned out so cute and is quite simple to make.

First, you need to figure out what you want in your shadow box.  For me, it was the stuff I didn’t want to lose, but really had no idea what to do with it.  I also wanted to get his little knit cap in the box as I paid far to much for it, but I couldn’t resist it.  I felt the keepsake wasn’t complete without a little picture of him.  I wanted a few little things to dress it up as well like the scrapbook embellishments and the wooden C.  I opted for scrapbook paper to add a little flare.

Once you’ve decided what you want in your box you need to decide how you want to arrange it.  I laid it all out on my scrapbook piece of paper before I started adhering anything so I could get an idea of how it would look. 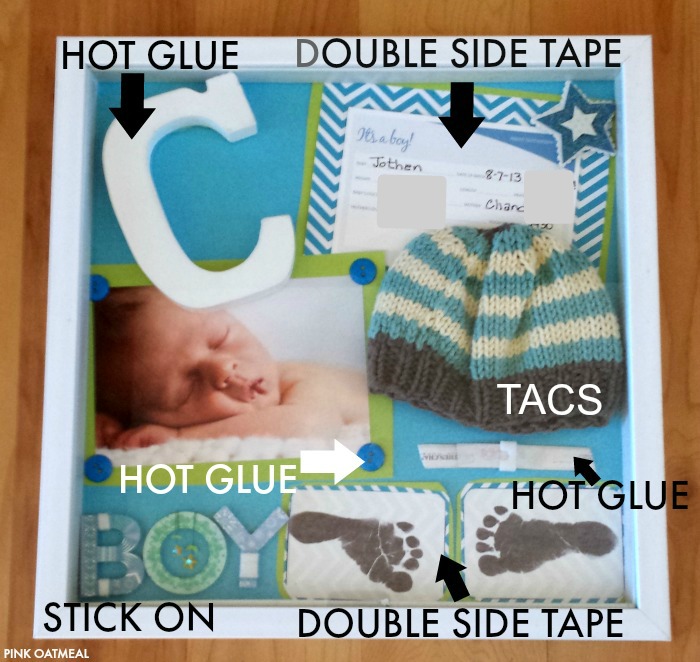 I had the entire project done within 30 minutes.  C’s keepsake box is on display in his room.  Finally done!  Better late than never!

13 shares
Scroll to Top
We use cookies to ensure that we give you the best experience on our website. If you continue to use this site we will assume that you are happy with it.OkRead more