Whether you are working with children in the home, clinic, or school, action songs for kids are an effective way to promote a variety of skills. Regardless of the setting, action songs can be used during transition times, as an intervention to promote specific skills, as a fun, playful way to get kids moving, or even embedded within classroom routines such as circle time.  Action songs are an excellent way to add movement breaks in the classroom. This post will review the benefits of using action songs with children and provide specific examples so that you can get started with using them today! 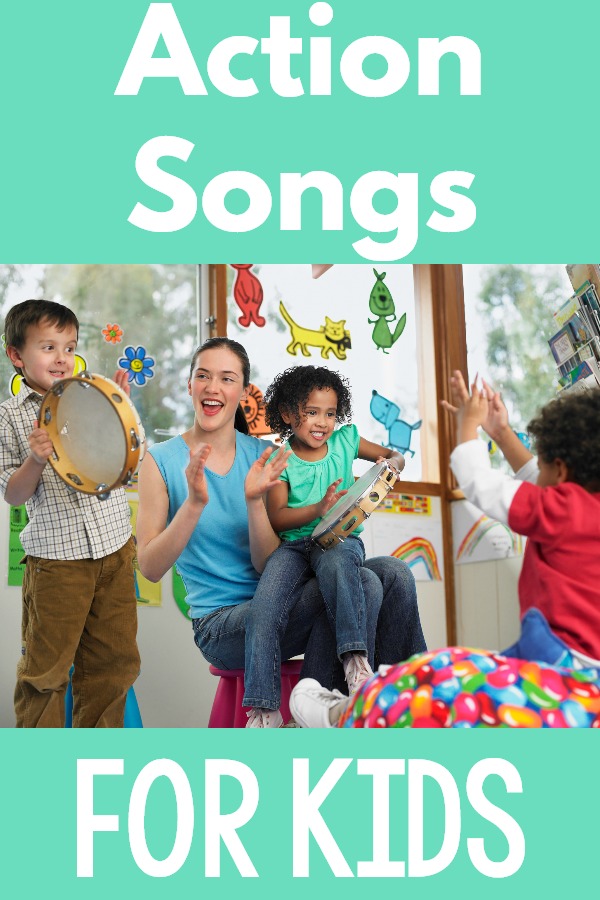 The benefits of using action songs with kids

If you are observing children engaging in an action song, you are likely to witness laughter and playfulness. Action songs are a great way to ensure fun, however there are also many skill benefits. Below, we will review some of the benefits of using action songs for kids.

Can assist with routines and transition times:

When kids are engaged in an action song, they are up and moving! This is an effective way to promote physical activity and movement. Physical activity is crucial for children and can help promote attention, information processing, and overall educational success.

Most action songs will reference different parts of the body or require movement and coordination of different body parts. This helps kids become more aware of where their bodies are in space and can help them with coordination of movement. In addition, when kids cross the midline (for example, right hand to left foot and vice versa), they are strengthening the connections in their brain, which leads to better learning outcomes.

Action songs require children to maintain attention, follow directions, and process what they are hearing in order to produce movement. Practicing these skills through the use of action songs can have benefits in other settings, such as home and school.

Each action song has its own theme or story. By exposing children to a variety of action song themes, they are being introduced to new words and language concepts. For example, many action songs can be used to help children learn prepositions such as over, under, on, between, etc.

If children are engaging in an action song in a group setting, they are using valuable social skills. Some of these skills might include respecting personal space, staying with the group, recognizing body language and non-verbal cues, recognizing feelings/emotions in others, etc. Action songs are a non-threatening way to help children practice social skills and engage in parallel play. Additionally, because action songs are predictable and familiar, they are likely to promote self-competence. Generally, a child’s self-esteem improves when they are successful at a task and repetition is a way to further promote this skill.

Examples of action songs for kids

Next, let’s take a look at some examples of action songs for kids. The songs below are typically appropriate for preschool through elementary aged children, however use your best judgment to determine which are most appropriate for the children you are using them with. Links with videos are provided for your convenience. It should be noted that videos or screens are not required for children to engage in action songs, they are included here for a visual reference.

–Head, shoulders, knees, and toes-This is a classic, well-known action song that most children will be exposed to at some point in their lives. This action song is a great way to promote body awareness and coordination.

We’re going on a bear hunt-This song is based on the popular book and is full of language opportunities for children. For example, the terms “over,” “under,” and “through” are used repeatedly. In addition, this song introduces children to emotions and offers the opportunity for dramatic play.

Around a circle– This action song is an effective way to help children transition to circle time or carpet time in the classroom. It provides a way for children to get a movement break before sitting and engaging in circle time. It also helps promote several skills including direction following, body awareness, gross motor skills, and counting.

Way up high in an apple tree-This song is a great option for a movement break in the classroom, as it takes about two to three minutes to complete the song and allows children to “shake” like a tree. Also, when children imitate picking apples from a tree, they are crossing the midline of their body, which helps develop the connection between both sides of the brain.

The hokey pokey– This is another well-known, classic action song. The hokey pokey promotes body awareness, coordination, direction following, and is widely used for groups of children as a fun, engaging social activity.

Listen and move– This action song introduces children to a variety of gross motor movements such as galloping, tip-toeing, hopping, etc. This song is another option for a quick, five minute movement break. During the second part of the song, only the music clips are played, with no verbal directions, requiring children to use their attention, listening, and memory skills.

If you are looking for a fun, easy to implement intervention idea that promotes a variety of skills, using action songs for kids is a great option. Children are also naturally drawn to action songs, due to their playful nature. There are an abundant number of action songs already developed and ready to use to assist with transitions, routines, and movement breaks. We hope this article highlighted the benefits and provided you with some ideas to get started on implementing action songs into your intervention sessions!

65shares
Scroll to Top
We use cookies to ensure that we give you the best experience on our website. If you continue to use this site we will assume that you are happy with it.OkRead more